1924 or The Eternal Present


Here's an 89 year-old newspaper article extolling the advantages of constructing a home with compressed soil, courtesy of the Special Collections librarians at the Sandusky Library in Sandusky, Ohio, USA.

The house in the lower right of the illustration is Oakmont, the Cabin John, Maryland  home of Dr Harry B. Humphrey featured in the famed  USDA Farmer's Bulletin 1500 - Rammed Earth Walls for Buildings  as well as Anthony F. Merrill's The Rammed Earth House.

Dr Humphrey (uncle of Vice President Hubert) was a phytopathologist with the Bureau of Plant Industry at the U.S.D.A., where he came across a pamphlet from South Africa dealing with rammed earth construction. His wife Olive designed the home, which was constructed in 1923 with the help of a carpenter and the Humphreys' two sons. The house still stands, weathering dozens of hurricanes, oceans of rain and record-breaking blizzards that have struck the area since its construction. 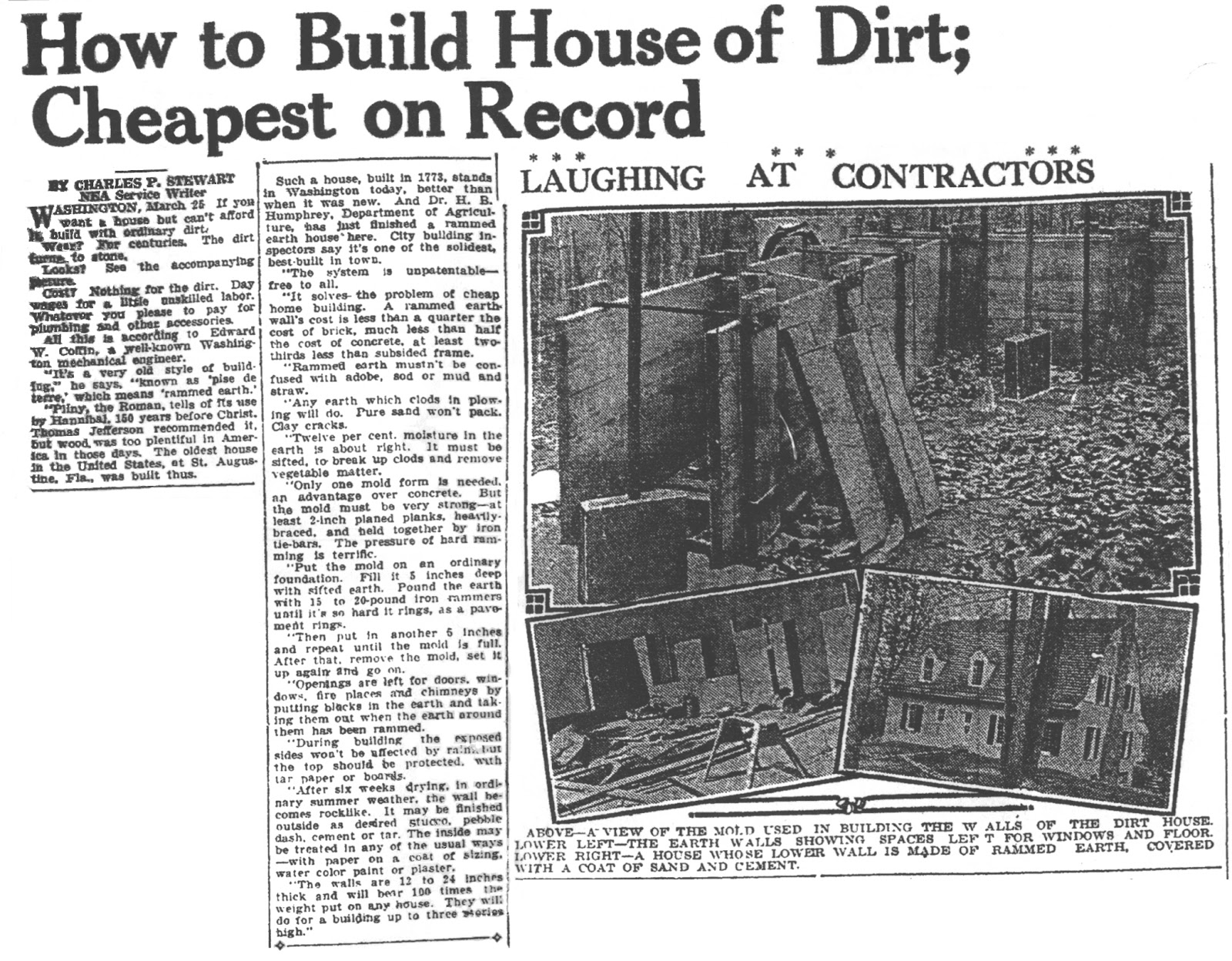 from the Sandusky Star-Journal
How to Build House of Dirt; Cheapest on Record
Laughing at Contractors
by Charles P. Stewart, NEA Service Writer
Washington, March 25, 1924

If you want a house but can't afford it, build with ordinary dirt.
Wear? For centuries. The dirt turns to stone.
looks? See the accompanying picture.
Cost? Nothing for the dirt. Day wages for a little unskilled labor.  Whatever you please to pay for plumbing and other accessories.
All this is according to Edward W. Coffin, a well-known Washington mechanical engineer.
"It's a very old style of building," he says "known as 'pise de terre', which means 'rammed earth.'
"Pliny, the Roman, tells of its use by Hannibal 150 years before Christ. Thomas Jefferson recommended it but wood was too plentiful in America in those days. The oldest house in the United States, at St. Augustine, Fla., was built thus.
Such a house, built in 1773, stands in Washington today, better than when it was new. And Dr H.B. Humphrey, Department of Agriculture, has just finished a rammed earth house here. City building inspectors say it's one of the solidest, best-built in town.
"The system is unpatentable-- free to all.
"It solves the problems of cheap home building. A rammed earth wall's cost is less than a quarter of the cost of brick, much less than half the cost of concrete, at least two thirds less than a subsided frame.
"Rammed earth mustn't be confused with adobe, sod or mud and straw.
"Any earth which clods in plowing will do. Pure sand won't pack. Clay cracks.
"Twelve per cent. moisture in the earth is about right. It must be sifted, to break up clods and remove vegetable matter.
"Only one mold form is needed, an advantage over concrete. But the mold must be very strong-- at least 2-inch planed planks, heavily braced, and held together by iron tie-bars. The pressure of hard ramming is terrific.
"Put the mold on an ordinary foundation. Fill it 5 inches deep with sifted earth. Pound with 15 to 20 pound iron rammers until it's so hard its rings, as a pavement rings.
"Then put in another 5 inches and repeat until the mold is full. After that, remove the mold, set it up again and go on.
"Openings are left for doors, windows, fire places and chimneys by putting blocks in the earth and taking them out when the earth around them has been rammed..
"During building the exposed sides won't be affected by rain, but the top should be protected, with tar paper or boards.
"After six weeks drying, in ordinary summer weather, the wall becomes rocklike. It may be finished outside as desired; stucco, pebble dash, cement or tar. The inside may be treated in any of the usual ways --with paper on a coat of sizing, water color paint or plaster.
"The walls are 12 to 24 inches thick and will bear 100 times the weight put on any house. They will do for a  building up to three stories high."

Hello,
This is how we are building our Rammed Earth Home
http://skrammedearth.blogspot.ca/